Feeling like you need tropical drink after this week's Mystery Monday puzzle? The answer is after the break!

So... you have a list of places mentioned in a song... how do you get numbers from that? There could be many ways involving founding dates, discovery dates, general latitude, but in this case the song is the key.

The song acts as an "index" (as discussed in Chapter 7 of "How To Puzzle Cache") putting the locations in a particular order, and order can be interpreted as numbers. Here are the places in order of mention in the song:

Most of the places from the first verses get repeated again.

Since there would be no way to determine if a mention of Jamaica would be a reference to the first or second (or third, fourth, fifth or sixth, Jamaica gets mentioned  a lot...) each subsequent mention after the first would be ignored, so the order of the first time a place is mentioned is important.

The flags represent the mentioned locations, and coordinates can be found by reading the rows top to bottom.

At the location you find a rather bizarre site... a forest clearing in the distinct shape of a shark. 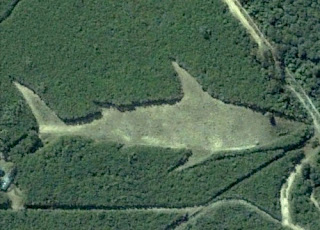 Not much is known about this formation. There is some online speculation that it is work of Greg Norman, an Australian professional golfer and entrepreneur nicknamed "The Great White Shark." He also uses a shark as part of his branding and logo.

Others have speculated that it was created by local 'Biripi' aboriginal people as a symbol of their culture.

It is unknown how long this formation has been in the forest but it is visible in the satellite photos from 2005, the earliest photos available of this area.