Anagramming the title reveal the clue "before and after," which is a category on Wheel of Fortune, and a common crossword clue. In a "before and after" puzzle you have a word that fits bot at the end and beginning of two common phrases, like the word apple in the phrases "Adam's apple," and "apple of my eye," which would be combined as "Adam's apple of my eye," in the puzzle. Got it?

Each of the phrases below anagrammed into a before and after style phrase, all of which had the word "red" in the middle. Having the red dashes in the middle, and red in the title should have provided a hint for that. 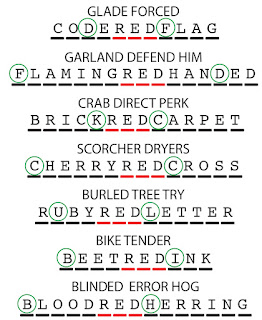 The puzzle description told you that the letters would convert to numeric values to solve the puzzle. For the first phrase we get D and F which equal 4 and 6. The coords start with a 46, which is a good start, but the F at the beginning of the next word also equals 6, making the coords impossible to read from left to right, however we can read top to bottom, using all the Befores for North, and all the Afters for the West.

At the coords we find... the world's largest lobster! (Red Lobster! Get it!?) Shediac, New Brunswick has a large lobster fishing industry, and considers itself "The Lobster Capitol of the World." The lobster sculpture was erected by the local Rotary club in 1990. It weighs 90 tons and is 11 m (35 ft.) in length, 5 m (16 ft.) in width and 5 m (16 ft.) in height, including a life-size lobster fisherman. It was originally carved and cast by artist Winston Bronnum. 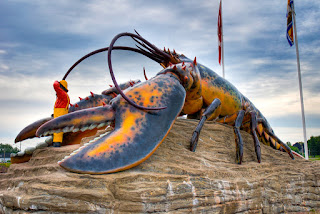