Was this week's Mystery Monday puzzle a bear or a pussy cat? The answer is after the break!

The puzzle this week is a popular geo-puzzle type: the code.

The code was made up of animals that each represented a letter of the alphabet. The easy way would be to identify the code. It was actually a font called "Afrika Phunny Phauna" but I think that would have been very difficult to figure out. So, let's look at the hard way.

If you don't know what each animal represents, and you can't find the source font... what do you do? The easiest thing is to transform the puzzle into another type: the cryptogram.

First assign each animal a letter, at random. The first visible animal was an elephant. Assign each appearance of the elephant an "A." Then came a rabbit, so all the rabbits get a "B." This continues until all the animals get a letter. The result won't look like much but if you feed it to a cryptogram solver (or solve it by hand) you will get your coords. (This is my favorite solver.)

And what did you find there? A ginat giraffe statue at the front gate of the Dallas Zoo! 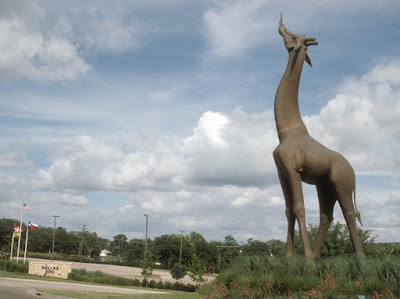 The bronze and plexiglass giraffe, by artist Bob Cassilly, was installed in 1997, and is 67 feet, 6 inches tall, making it the tallest statue in Texas! It was originally about a foot shorter, but when the Huntsville, TX visitors center installed a large statue of Sam Houston the giraffe got edged out. Not to be outdone, the zoo added a blade of grass to the giraffe's mouth and returned the giraffe to it's record holding statues.