Did you pass "Go" and "Collect $200 Dollars" with this week's Mystery Monday puzzle or did you end up in Jail? The answer is after the break!


"The Landlord's Game" is the original name for the game now known as Monopoly. The quote in the description regarding  learning about taxation and land ownership was the original goal of the game. So we know that it's about Monopoly... How does that help?

Anyone who has ever played Monopoly knows that the game involves several denominations of differently colored money. By examining the squares of color, and determining which denomination is represented, then adding up the value of each stack coordinates are revealed!

I warned in the description that you should verify your sources. There are many variations online that could have led you astray, but by visiting a verifiable source, like the Hasbro website, you should have found an image that would help. 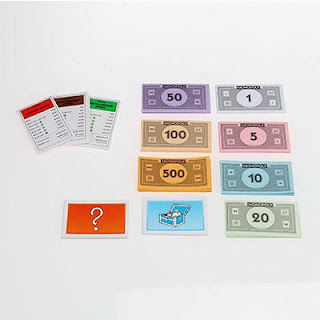 So what do you find at the final? The world's largest playable Monopoly board! 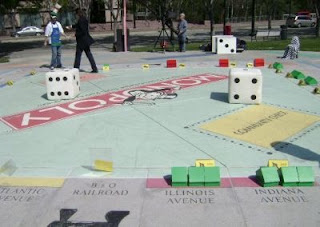 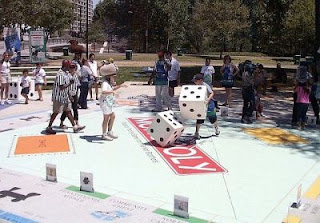 The board was originally built for the 1992 San Francisco Garden and Landscaping show. It was moved to San Jose in 2002. It is 930 square feet, made of custom designed granite slabs. Each property weighs 140lbs, and the corner pieces and pieces that make up the center of the board weigh 236lbs each.

The board is available for rental through the city parks department, for parties and events and they provide all the pieces required, as well as a referee!