Ready to unwrap the answers to this week's puzzle? Check it out after the break!


Each ornament has a "highlight" on it, that gives an order to move between the ornaments, and connect them like dots. By connecting the "dots" of the ornaments in order shapes reveal numbers.

Here is an image that shows how to get the 2 from the red ornaments on the West wreath. (The other ornaments have been softened to make it easier to see.) 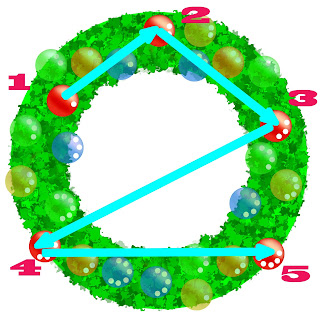 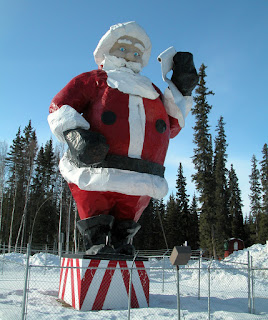 The world's largest statue of Santa! More than 48 feet tall and 33 feet wide, this gigantic statue stands next to the world famous Santa Claus House. Over the years it has come and gone from holding the record as "world's largest." Note in the photo that it stands atop a wrapped Christmas gift, added to bump it back into record holding range after a statue was erected along Route 66. Some say the fiberglass sculpture was original constructed for the 1962 World's Fair in Seattle, but other local historians mark the construction to 1968 by Wes Stanley for Seattle's Westlake Mall. Whatever the truth he's stood in this spot inspecting his "naughty list," for quite a while. Besides being the largest, it is the northernmost Santa in the world.

How did the puzzle go for you?

(There was a brief period after posting where the first two digits for the North were reversed, my apologies.)
Posted by Unknown at 11:49 AM