As you hopefully know Groundspeak is going to issue us 3 coded "Missions" that will result in caching Souvenirs if we decode the mission properly and take the actions described. (More information here.) The first mission was released to Premium members yesterday, and will be released to everyone else next weekend, but I'm sure you've all seen it by now, right?

So let's break the puzzle down. 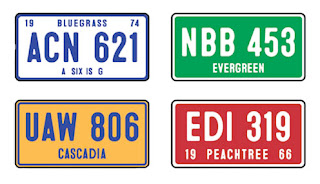 We were given four license plates, and told that they contained an encoded message. What do we have to go go on? The four plates are from different states, Kentucky, Washington, British Columbia (in Canada) and Georgia based on the slogans, but that doesn't help much. The strange thing is the "A SIX IS G" slogan, which stands out because it doesn't match up to any state, and definitely not directly with Kentucky.

I'll admit that it tripped me up at first because I thought it meant that the 6 represented G, as it sometimes does in "l33tspeeak." Eventually I figured out that that was not what they meant though.

Notice that each plate has three letters followed by three numbers. If you read "A SIX IS G" a little differently it could be "A6 is G," linking the first letter and the first number in the two groups. 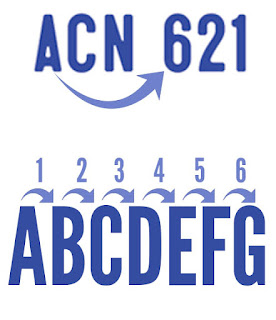 Basically what you have is a variation on a Caesar Cipher, or a Rotation Cipher. Most geocachers are familiar with Rot-13 which is how hints are encoded on cache pages, this puzzle uses other rotations.

Can you solve the rest on your own? Once you have the answer visit this website and enter the password (no spaces) into the box to get your "mission."
Posted by Unknown at 12:00 PM