Did you manage to pull up your socks and get the answer to this week's Mystery Monday puzzle ?Answers after the break!

This week's puzzle was based on the concept of a Cardan Grille, which is a card brother piece of material that can be laid on a book, or grid of letters to reveal a message. In this case each sock could be laid onto the grid, using the arrows as a positioning guide. The holes in the socks revealed numbers which make up the coords. 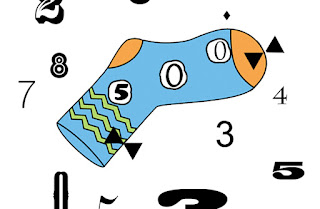 This puzzle was made slightly more difficult by the change in the west coords, since the fake "start coords" are 79°, not 80°. 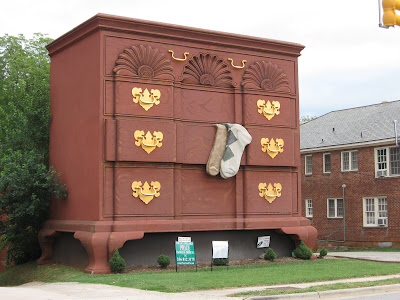 One of the candidates for the World's Largest Chest of Drawers! Both candidates are near High Point,  NC, one of the country's leaders in furniture manufacturing. This chest of drawers was built in the 1920s by the High Point Chamber of Commerce. The twenty foot tall building-with-knobs served as the local "bureau of information." In 1996, the building was completely renovated and converted into a 38-foot tall Goddard-Townsend block front chest. A real chest was used as a prototype -- it can be viewed in the Lobby of the local visitor information center. Two gigantic socks dangle from a drawer, officially symbolizing "the city's hosiery industry."

Just down the road in Jamestown, the furniture store Furnitureland South has erected an 80' "high boy" on the outside of their building, more than twice the height of the original, but residents of High Point will be quick to point out that theirs is freestanding, while the one in Jamestown is attached to another building.

How did the puzzle go for you this week?