Hop you haven't ground your teeth too much waiting on the answer to this week's puzzle. It's after the break!


The two pieces of floss formed the digits to this week's puzzle by wrapping around specific teeth. Dentists number teeth starting with the right upper rear molar and continuing clockwise. 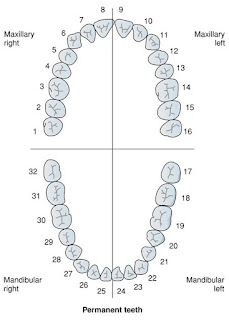 Each tooth circled by the floss was in the order of the coordinates, with a few extra spaces. After removing these and adding the decimal point you should easily find coordinates.

At those coordinates you find this: 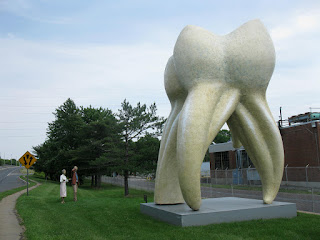 The sculpture (the two "people" in the photograph are part of the sculpture) is entitled "The Tooth," and is by J Seward Johnson. Johnson's work has been controversial, it mostly consists of large scale realistic replicas of everyday people and objects, which some have a hard time defining as "art." This is one of several pieces by Johnson and other artists that stand along this stretch of road just outside the Hamilton Township train station. The area is known as "Grounds for Sculpture" and covers 42 acres of the former NJ State Fairgrounds. There are also indoor exhibits, classes, lectures and more.

There is a real world cache associated with this sculpture as well, GC26TXM: A Toothsome Cache. It's also a puzzle, but uses a very different mechanism.

So, how did you do? Hope you didn't chip a tooth on the puzzle! "Fangs" for all the comments!