Put on some moo'd music it's time for the answer to this week's Mystery Monday puzzle, after the break!

Most of the Ook decoders I tried (like this one at Splitbrain) were able to translate the cow without having to change it.

At the final coords you were treated to a view of Salem Sue, the world's largest fiberglass cow. 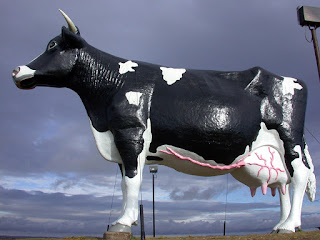 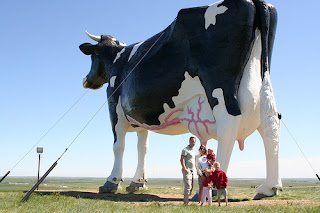 Salem Sue was 1974 by the local Lions Club in an effort to build awareness about the local dairy industry. Sue is 38' (11.5 meters) tall and 50' (15 meters) long. She clocks in at over 6 tons. Thanks to the flat terrain of North Dakota, and the hill that Sue occupies, she can be seen on the horizon from neighboring counties on clear days.

How did you do with the puzzle? Udder-ly impossible? Or do you deserve a "pat" on the back? Do you have beef with me now?

I did forget to mention that this was guest authored by Jennifer Kidder of the Geocaching Puzzle of the Day Blog, so thanks again, Jennifer!
Posted by Unknown at 12:00 PM