Having trouble getting off the ground with  this week's Mystery Monday puzzle? The answer is after the break!

Each of the images provided is a mission patch from a NASA Shuttle mission. Those missions were first numbered using a system that referred to the fiscal year and launch site, but later just became sequential numbering.

To make the puzzle a bit more challenging the names of the flight crew (which are normally shown on the outer edge of the patch) were removed so that you had to ID the patches by sight. 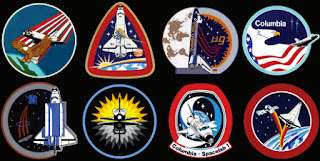 At those coords you should find an outline of the space shuttle, formed by sections of gravel paving. This is part of the Pathfinder Fitness Trail. If you look closely at the satellite image you can see fitness equipment in the area where the thrusters would be located on a shuttle. The outline of the shuttle itself is intended to be used as a running track. 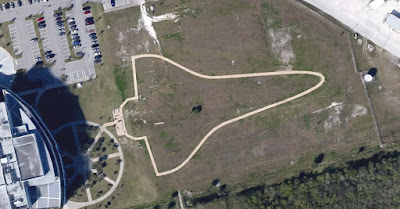