FC4NDY: A Rainbow of Flavor ANSWER

Was this week's Mystery Monday puzzle a sweet treat or hard to swallow? The answer is after the break.


The key to solving this week's puzzle was in a mnemonic that many of us learned as children to help remember the colors of the rainbow: the man's name Roy G Biv, which stands for Red, Orange, Yellow, Green, Blue, Indigo, Violet. The repeated references to "rainbow" hopefully hinted you towards that.

The second piece of info that you need to solve is to see that the candy is divided into two groups of seven, that's fourteen pieces of candy (or groups of candy) and we know that it takes fourteen digits to create coords (in the region where the puzzle is at least.)

The puzzle presents a couple twists on that formula. The first is that there are a few pieces of candy that are white, with no color. We know that the local minutes are 20, so using that info we can probably guess that the white candies represent zeroes.

The second twist is the "combined" candies, like the second number in the west minutes. One limitation of the Roy G Biv system is that it only goes up to 7. So we have to do a little work to get higher numbers. We know that yellow is 3, and Blue is 5. We also know that the local west minutes are 28, so we can probably guess that 3+5=8.

The final twist was in the final digit and tripped a few of you up. Notice that the lower candy is a bit darker than the two previous blue candies? That's because it is indigo, not blue. If you decided it was blue you would have gotten a checksum of 43, not 44 as required, but the good news is that it is the least significant digit so you'd probably still find the cache.

So what DID you find there? A giant roll of Lifesavers! 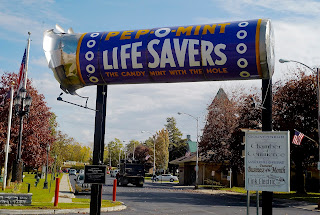 The town of Gouverner, NY erected the sculpture in 1987 to honor local son E.J. Noble. Noble did not invent Lifesavers, but he purchased the recipe for the candy in 1913 and founded the company. He named the candy and invented the iconic foil and wax-paper wrapping and brought the candy to national fame using a unique scheme. He had specially made displays that could be placed near cash registers, and as part of stocking the candy store owners agreed to always include a nickel as part of the customer's change. The price of the candy? A nickel.

The sculpture, which depicts the original flavor of Lifesaver: Pep-O-Mint, was originally one of five that depicted all the varieties of candy made by the company, and were arranged outside the original factory in Port Chester, NY. 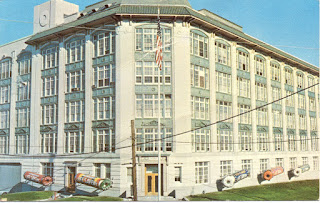 According to the website the five sculptures were removed from the building in 1986 when the factory was converted to condos. The sculptures were supposedly distributed to communities around the US that had some historic connection to the company. However, this is the only one that I can find any evidence of it actually being displayed. Does anyone know where any of the others are?