Does this week's Mystery Monday puzzle have you feeling all out to sea? The answer is after the break!


This week's puzzle was one of the infamous "story puzzles" that a lot of you tell me that you have trouble with. In this case you were told that there were 11 boats docked at a harbor and that two of them would help you find the cache. Only two ships are mentioned by name, the Melati Satu, and the GSP Alcor. So, how do you turn those names into numbers for coordinates?

The first thing I'd do is simply google the names, they are fairly unique and shouldn't have that many hits. Starting with Melati Satu you'd see that there are several ships that include those two words as part of their name, but one of the top returns is for our ship. Once we get to that page we see that ships have a lot of different identifiers, call signs, MMSI identifiers, and IMO numbers among them. Hopefully "IMO" triggered a memory of those letters being in the title of the cache "IMOn A Boat!"

IMO is short for International Marine Organization and is a unique seven digit number that is assigned to all passenger ships of 100 gross tonnes and upwards and all cargo ships of 300 gross tonnes and upwards. The IMO for the Melati Satu is 9123659.  The starting east coords start with 12 as well. The last hint in the description will also help, it tells us that we can "ignore the first 9." That leaves us with 123659, or 12° 36' 59" in the format we were told to solve for.

So, what do we find at the final coords? Just to the south and west of the coords in the satellite view is the Danish National Maritime Museum, which brings a new definition to the phrase "ship shape." 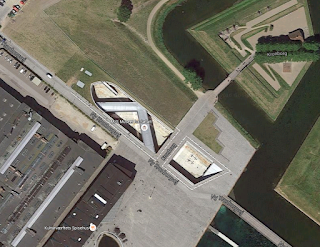 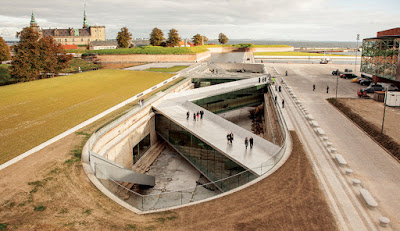 The museum zig-zags through a 60 year old dry dock, several stories underground. The design firm responsible for the museum says that the idea to go underground stemmed from local ordinances that say that nothing can be taller than the nearby Kronborg Castle, a UNESCO world heritage site. By using the dry dock as the basis for the museum they both honored the ordinance, and the local maritime history.