FCVR00M And Now He only Eats Guitars: ANSWER

Alright, pull into the pitstop and let's see who has the answers to this week's Mystery Monday puzzle! (After the break!)


There wasn't a lot of information in this week's puzzle, just six photos of toy cars. So what do you do with that?! My general advice with photo puzzles is to always drop the photo into a reverse search engine, either at Google Images are at TinEye (there are a few others out there as well) and see if you can find the source. (I talk about this in-depth on page 20 of How To Puzzle Cache. Doing that turns up a couple places that these photos appear online, but they all consistently appear on wikis for Matchbox cars, and at a website called Matchbox Dan, a fan page for Matchbox cars. Some poking around at either of those sources should eventually reveal that Matchbox cars have what is called a "Manufacturer's Number" imprinted in metal on the bottom of the cars. These numbers form the basis for the coords to solve the puzzle.

At the final location  you should find yourself right outside the Dover International Speedway with a view of "Miles the Monster," the official mascot of the speedway. Miles is a 46 foot tall, 20 ton concrete behemoth who was installed in 2008 as part of the Speedway's "Monster Make-over." Miles hoists a racecar above his head, and features red glowing eyes that can bee seen from the nearby highway. In the past he has also temporarily carried FedEx boxes or Pepsi bottles under his left arm as sponsorship. Miles even appears on the race trophy for the Speedway! 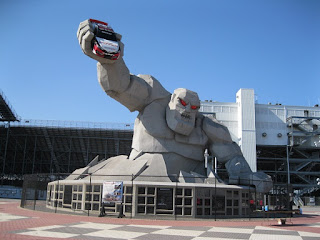 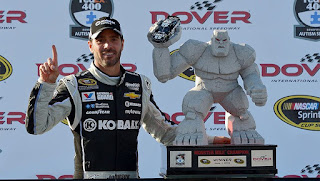 How did the puzzle go? Did you drive it home?
Posted by Unknown at 12:00 PM