Ready for an answer to this week's Mystery Monday puzzle? It's after the break!


This one ended up being a bit more difficult for you guys than I had anticipated. It probably didn't help that I made a mistake in the first image I posted... sorry about that!

So you were given two blocks of numbers. The hints on the page were the title (Signal to Noise) the repetition of the word signal in the description, and (very subtly) the circled number/letter string on the side, (6EQUJ5) and the word "Wow!" If you google those numbers and letters you'd quickly find links to what is known as the Wow Signal, a signal discovered by radio astronomers in the 70's. So, lots of references to "signals" and "noise."

In many ways this puzzle functions as a Cardan Grille (Page 173 in How To Puzzle Cache). By comparing the two sets of numbers you will see that there are places in the two sets where the numbers are different. The digits that appear in those locations form coords, the top set for North, the bottom set for West. The differences are marked in red here: 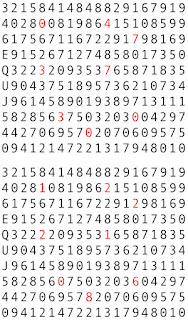 So what do you find there? the roof of the Seattle Armory Center and.... Two giant spiders!! 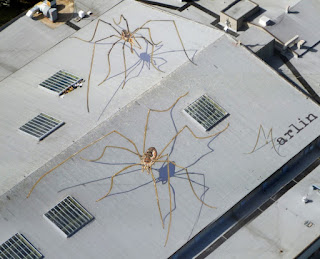 In reality the two spiders are anamorphic paintings by an artist named Marlin Peterson. The spiders are visible from the nearby tourist attraction, The Space Needle, and were done in conjunction with the Artist Trust of Washington. When the local TV station asked him what reaction he expected from the mural he said, "“The only thing I can really hope to shoot for is maybe some tears from a kid or something. Then I’ll know I did my job.” You'll find more pictures and timelapse videos of the murals being painted at that link.

So how did you do with the puzzle? This one seemed to stump a lot of you.