Did the winds of this week's Mystery Monday puzzle blow in your direction? the answer is after the break!


The first step of this week's puzzle was pretty simple: decoding some Morse. But once it was decoded you were probably left with some unusual looking text, like this:

So, what to do with that? A google of one or two f the words should quickly reveal that they are part of the Navajo Code from World War 2. There are several decoders for it online (I used this one.) that will reveal the coordinates.

What did you find at the coords? A memorial erected in honor of the 29 Navajo Code Talkers that served in the Marines during the war. 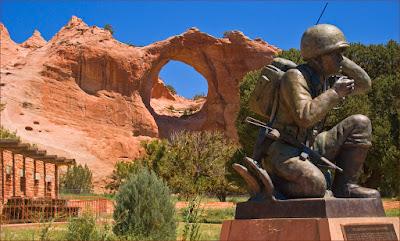 Though the Navajo were not the first Native Americans used for code talking purposes (there were Cherokee and Choctaw who provided that service in WW1) they are the most well known. The code uses three different Navajo phrases to represent each letter, chosen depending on how many times that letter is used in the text. For instance "A" can be represented by either WOL-LA-CHEE, TSE-NILL, or BE-LA-SANA. There are also some common military words that are represented by single Navajo words, for instance "bomber" was encoded using the Navajo word for 'buzzard." It is credited as being the only primarily spoken code that was never broken by the enemy during the war, and some sources say it has never been broken.

The involvement of these men in the war was kept secret until 1968. In 1982 President Reagan publicly acknowledged the men, and in 2000 President Clinton awarded the Congressional Gold Medal to the original 29 Navajo Code Talkers, and Silver Medals to some 300 others who were involved in the program. President Bush presented these medals to the four surviving participants in 2001. The last survivor, Chester Nez, died in 2014. Most of the 29 died without public acknowledgement of their secret work that many credit with winning the war in the Pacific theatre.