FCUL7R4: Neither Rain, Nor Sleet ANSWER

How did you do with this week's "monstrous" puzzle? The answer is after the break!


The title, CO Name, and some of the hints in the description pointed towards something to do with the Post Office. In the image are two clear bar codes. Hopefully the idea came to you that the Post Office uses bar codes as part of their mail system.

Once you have that realization you can either decode the bar code by eye, (you can learn how to do that at this website) or you were able to use an app or website (perhaps this one) to read the image.

Some people mentioned to me that the code had an extra digit, a '5' that appeared at the end. This is true. This is called the "Correction Character" and is part of the bar code system. The system uses a "check-sum" to verify the bar code. Each digit represented in the code is added up and a final number is added to make the total divisible by 10. So in the case of the north coords in the puzzle it would have been 2+8+0+3+2=15. 15+5=20. Without this extra digit the code would be readable by eye, but not by machine.

And at those coords you find...? 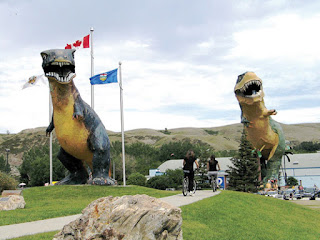 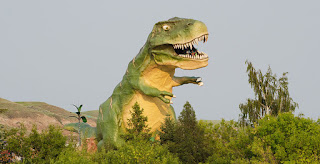 The world's largest dinosaur! Drumheller, Canada is known as the Dinosaur Capital of the World since it is home to the highest concentration of Cretaceous fossils in the world. It is home to the Royal Tyrell Museum, home of over 110,000 fossils, and many other dinosaur related attractions.

The World's Largest Dinosaur was constructed between 1999 and 2001and is 86 feet tall, 4.5 times taller than the average real t-rex. You can climb inside the dino and stand inside its mouth, which can hold up to 12 visitors at a time.

The attraction was conceived as a way to reinvest in the area, and 15% of the proceeds from admissions and gift shop sales are invested through the "World's Largest Dinosaur Fund" to local not-for-profit groups and attractions. They have distributed more than $625,000 since the opening of the attraction.