Did you find this week's Mystery Monday puzzle super? Or villainous? The answer is after the break!


This week's puzzle is what I refer to as an "Indexing Puzzle," information that has been assigned numbers based on an index of some sort that can be looked up and cross-referenced.

In the puzzle a gentleman is telling a story, and making repeated references to past events, such as 'The Rubbish Robbers,' and 'The Man who Married Lois Lane.' Each of these is set apart in the story by being enclosed in apostrophes. If you google the information inside the apostrophes you should soon find that they are the titles of stories from issues of various Superman comic books.

A note about googling information. Some people had trouble finding exact issues because the words in some of the titles are fairly common. When googling phrases like that enclose the phrase in quotation marks like this: "The Rubbish Robbers" that tells google that you want exactly those words, in exactly that order. It will help narrow down the results.

The local coords start with 37, and if you successfully search for 'The Rubbish Robbers" you'll find that it appeared in Superman #37. 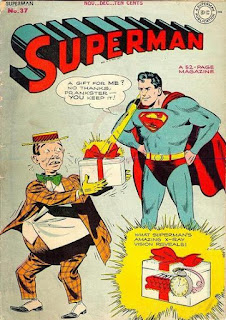 And what do you find at those coords? 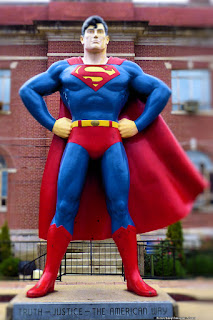 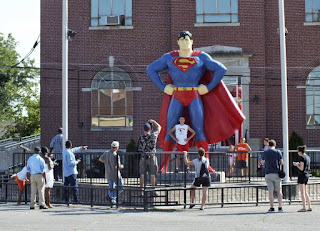 A statue of the man himself! The town (Metropolis, IL) shares a name with Superman's fictitious home from the comic series. On June 9, 1972, the Illinois House of Representatives officially proclaimed that Metropolis was the Hometown of Superman. The following year the "Amazing World of Superman" museum opened in town. Metropolis had plans to build a thousand-acre, $50 million Superman theme park, with a 200-foot-tall statue. Cars would drive between Superman's legs to enter the park.Unfortunately, the economic issues of the 1970's hit the area hard and the plans were scrapped. The "Amazing World of Superman" museum closed after just a year in business.

In 1986 they tried again and put up a fiberglass Superman statue that cost the town just under $1,000. Unfortunately, it was the target of vandals and was soon taken down. 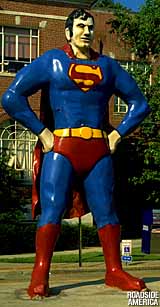 In 1993 they made one last attempt, erecting a 12' tall bronze statue, partially funded by donations from the community, with the difference made up from a local casino. The same year the "Super Museum" opened across the street from the statue. The town, the statue, and the museum have all happily thrived since. The town has even added a life-sized bronze Lois Lane, and a chunk of "kryptonite" to the parks in the downtown area.

How did you do with the puzzle?
Posted by Unknown at 12:32 PM