FC35MM: Quite A Collection ANSWER

You had a little extra time on this week's Mystery Monday puzzle thanks to the holiday. How did you do?


This week's puzzle gave you an image of DVD cases with some film titles visible. The word "Collection" was in the cache name. Some of the film titles were a bit obscured, but if you Googled a few hopefully you figured out that they were part of the "Criterion Collection." Each of those films is assigned a number that appears on the spine of the case. For instance the first film, "The Lady Vanishes" is #3. By putting the films in order, top to bottom, you should get the coords 34° 00.801, -118° 24.149. At those coords you would see... 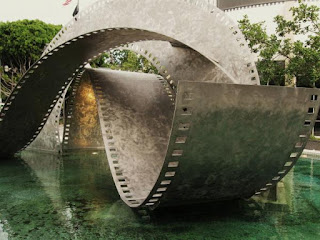 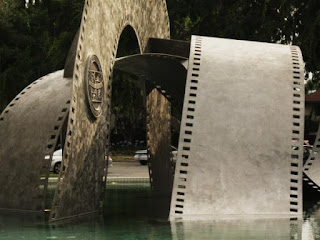 A sculpture entitled "Filmstrip U.S.A," by Natalie Krol. The sculpture was dedicated on November 11, 1981 as part of a week long "Salute to the Film Industry," in Culver City which is just outside the studio district of Hollywood. The sculpture's three film strips symbolize the three major studios that flourished in the city in the 1940's. It was recently recognized by the Smithsonian as being an important cultural symbol for California.

One note, I did originally publish this puzzle with an error. The initial coords were identical to the final. And the checksum was based off the wrong coords as well, it should have been 45, not 50.