Was this week's Mystery Monday puzzle a celebration? Or just another date on the calendar?

The answer is after the break!

My first step would always be to turn to Google. If you google the words together (paper, iron, leather, pottery, etc.) you would hopefully get a list like this, especially once we tack on the word "anniversary. Using that list we can learn that each wedding anniversary has a traditional gift associated with it. The first is paper, second is cotton, third is leather, etc. So, we have an easy way to associate numbers with the words.

One last wrinkle... We know that coords can be written with 10 digits (if we assume the full degrees) but there are only 9 items in the list. That could be a problem. But if we examine the start coords we see that the whole minutes are 08, so the CO might have skipped that 0, leaving 9 digits. 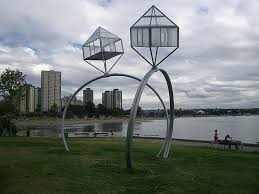 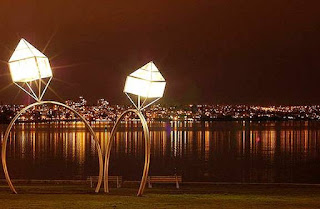 A giant sculpture of two wedding rings! The sculpture is titled "Engagement" and is by sculptor David Oppenheim. Installed at Sunset Beach in 2005, the sculpture depicts two diamond engagement rings and stands nearly 30 feet tall. The diamonds, illuminated and tilting away from one another, are composed of translucent plexiglass boxes, steel and aluminum. The sculpture is a variation of one first created by Oppenheim in 1995. Copies have been on display in San Diego, CA; Reno, NV; Ruoholahti, Finland; and Leoben, Austria. Vancouver made their installation permanent following Oppenheim's death in 2011.