FC1SL35 The Cat Came Back ANSWER

Did this week's Mystery Monday puzzle Have you yelling "Bravo?" Or begging you Papa for help?
Answers after the break!
This one was pretty straightforward, it used words from the NATO Phonetic Alphabet as part of the story. (Oscar, November, Echo, Foxtrot, Uniform, Romeo, etc...) Each of the words represents a letter and so spells ONE FOUR SIX ZERO THREE NINE. Not enough words for a full set of coords, but some COs only give you the part of the coords that have changed, so when combined with the degrees and minutes from the original coords you get 13° 10.146'N   59° 37.039'W.

If you don't know the NATO alphabet the key to this puzzle is recognizing the repetition and Googling the correct combination of words to get you a complete list.

So what do you find at the final? 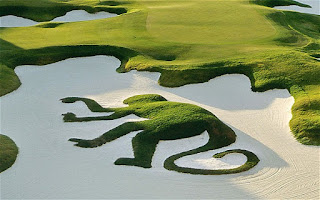 A sand trap at the Sandy Lane's "Green Monkey" golf course! Ranked as one of the top ten courses in the Caribbean, it was built in the remains of a former limestone quarry. It's also considered one of the five most expensive rounds of golf in the world with an average cost of about $240. But that doesn't tell the whole story, because golf on the Green Monkey course is a package deal. You can't just show up and play a round unless you are staying at the resort. Rates in the even most modest suite at the resort start at over $1,000 a day.

So, why did I choose a golf course as the final? I had one interesting guess that it was because we just started the year of the monkey according to the Chinese astrological calendar, but in actuality I chose it because "GOLF" is one of the NATO words, representing the letter G.