FC4R43S: Like Ma Bell Used To Do It ANSWER

Did this week's Mystery Monday puzzle require you to call the party line? Answer after the break!


All the hints on the page (the attribute, the title, the CO name) lead to something to do with a telephone. But what? Well the text mentions doing something the way it used to be done. The biggest clue to what exactly you need to do is that the numbers are often repeated. Prior to the advent of smartphones people who used text messages to communicate would have to press each key repeatedly in order to get a letter. For example the "2" key returns and A if pressed only once, but a B if pressed twice. Most of the digits would never be repeated more than three times, (though some new phones us a fourth 7 or a fourth 9.) This is called "Multi-press texting," and is the method used to encode the coordinates.

There is a decoding tool at DCode for this cipher method, as well as "Single-press texting" which would guess the word you meant. This is also sometimes called T9 or Predictive Texting.

So what is at the coordinates? The world's largest candlestick telephone. 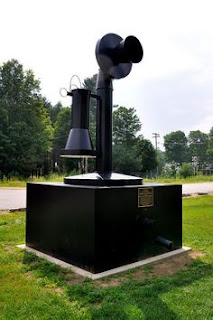 Bryant Pond, Maine was the last location in the United States to use hand cranked telephones. In 2008 they erected this monument to that fact, celebrating 25 years since they were forced to switch to touch-tone dialing. That's right... they were using hand-cranked candlestick telephones until 1983!

In 1982 there were 431 customers using the Bryant Park Phone System and more than 70% of them voted to KEEP the antiquated system rather than change to modern touch tone phones, though they were eventually forced to change. You can read much more about it here.