Ready for the answer to this week's Mystery Monday puzzle? Grab some coffee and join me after the break...


The puzzle gave you a grid of eggs and bacon images... so... what can you do with that?

The puzzle is a take on the Bacon Cipher, (Page 174 in How To Puzzle Cache). The Bacon Cipher (or Baconian Cipher) uses a series of alternating bits, As and Bs, that are differentiated in some way. These are grouped in blocks of five. It is normally done with regular or italic text. Like this:

If italic letters are Bs and regular letters are As that gives us BAABA, which is the Bacon equivalent of the letter T.

So, in our cipher test we have bacon and eggs. 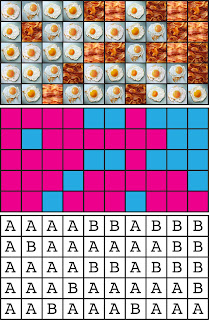 We can make that a little easier to look at if we look at it just as color blocks, and ultimately replacing each with just the letters.

Since Bacon uses blocks of five letters and the grid is 10x5, you could potentially read the the blocks vertically, which works find until we get to the eighth block of "BBBAA" which doesn't match anything in a standard Bacon cipher. 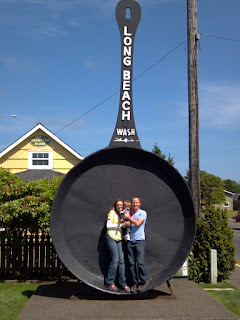 The world's largest frying pan! (Technically it is one of six objects in the US that claim the title, but we'll just it to them.) The surface of the pan is over nine feet across and the tip of the handle is almost 15 feet off the ground. The original pan (this one is a fiberglass replica) was first used in the 1941 Clam Festival. In fact, if you look just to the left of the pan on Streetview you'll also see the world's largest razor clam!

It was used in the festival from 1941 to 1948 and one of the highlights of the festival was when the local beauty queen prepped the pan for the festival by "skating" around it with slabs of bacon strapped to her feet, and pushing herself with a giant wooden spatula. 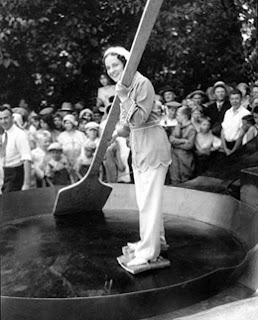 The pan was eventually retired when the local clam industry died, and the festival was longer a viable concern. It was rented out around the Northwest for other festivals and parties, before finding a home at Marsh's Free Museum.

So how did you do with the puzzle?
Posted by Unknown at 11:53 AM