FCST4FF: It's All About The Base ANSWER

Did this week's Mystery Monday puzzle have you singing along? Or did you find yourself hexed and unable to pick up the tune?

Answers after the break!
This one required you to first read the musical notes, which had the added wrinkle of being on a bass clef, rather than a treble clef. Those notes are BBAA and CEED. But what to do with those?

The next step was recognizing that "Bass" has a double meaning, with it's homophone "Base." Couple with the hint in the text you needed to realize that the notes were hexadecimal numbers. So BBAA and CEED in hex gives you 48042 and 52973 when converted to decimal. Divided up and combined into coordinates (with the 33 and 117 that you were told you could assume) you have N 33° 48.042 W 117° 52.973.

And what do you find there? Another pun on "base:" The Home Stadium of the Los Angeles Angels! 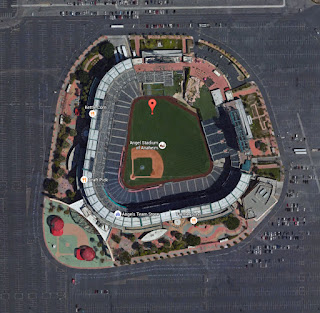 You guys (at least those that have commented already) seemed to do really well with this one! I thought it was going to be a bit harder for you. Goes to show that COs sometimes have no idea how difficult their own puzzles are!