Ready to pull over and check out the answer to this week's Mystery Monday puzzle? It's after the break!

This week's puzzle was mostly about the cipher. The biggest trick to any cipher is recognizing it. So, if you've never heard of a Gold Bug cipher? You could try googling things like "Cipher using numbers and symbols," or "cipher using dagger" (which is the typographic name of this symbol: †). In this case you can probably guess that the car is a hint, so you might try "cipher Volkswagon," which would get you nothing useful. If you eventually hit on "cipher gold" or "cipher bug," the correct cipher is the first return.

The Gold Bug cipher should fall to a simple "replace and cryptogram" attack if you have a cryptogram solver strong enough to deal with the missing spaces.

The Cipher Flowchart in How To Puzzle Cache should also identify Gold Bug pretty easily for you.

So, once you have the cipher you get "Letters T and B numbers 2 1 8 2 Letter W," not coords! Hopefully you recognize TB2182W as being a TB code (Travel BUG, Gold BUG, get it?) and visit the appropriate TB, where you will find coords.

At the final location you should find a sculpture by Kirk Jellum of a giant mantis. The mantis is a steel sculpture built into the back of a dumptruck and was originally designed for Burning Man 2010. It is 40' long, and 30' high and it shots flames from the tips of its antennae! Two years after Burning Man it was purchased by a developer in Las Vegas to become a permanent fixture at the "Downtown Container Park," a shopping center constructed out shipping containers. 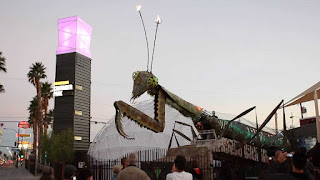 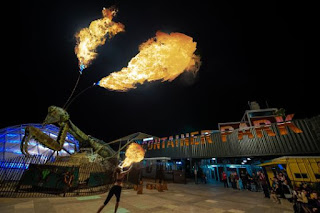 How did you do with the puzzle this week?